May 10, 2020Tony BeckwithAATIA members, In memoriam

Marta Cecilia Gallo Cardona de Blumenthal was born in the mountains near Santa Rosa de Cabal, Risaralda, Colombia. She was the last of nine children—6 boys and 3 girls—born to Maruja Cardona and Marco Tulio Gallo. 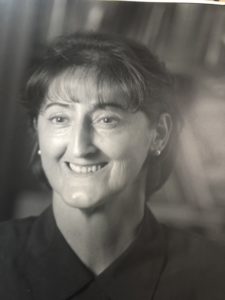 Marta Cecilia studied at public schools and private “colegios católicos” in Colombia. Her undergraduate degree, in teaching English and French, was from the Universidad La Salle. She earned her Master’s at the Universidad de Santo Tomás with an emphasis on the Administration of Education. Warm and friendly, light on her feet and a lovely dancer, Marta Cecilia was also a teacher. While working on her Master’s, she taught Spanish to Peace Corps volunteers. One of her students was an American, Michael Blumenthal, who would become her husband. They courted for three years, were married in 1982, and moved to Austin, Texas in 1983.

Marta initially worked part-time for several language schools and at an international adoption agency that operated in 14 Spanish-speaking countries. In 1984 she and Michael began providing English to Spanish translations of adoption documents, working on a typewriter on their dining room table. In 1986 they bought their home in Buda, Texas. In 1987, they founded their own agency, M & M Translation, Inc. Both of them, meanwhile, held full-time positions as translators for Texas state agencies. Marta was hired at the Texas Department of Human Services in 1988; known for her strict attention to detail and high standards, she became the supervisor of the Language and Internet Services Unit of the Texas Health and Human Services Commission, a position she held for many years. She and Michael both retired in May 2012 and continued to enjoy traveling together. Marta felt very much at home in Italy, where her father’s family was originally from. She especially loved the city of Lucca.

Marta was among the very early members of the Austin Area Translators and Interpreters Association (AATIA), which was founded in 1985. She and Michael were steadfast supporters of the group, serving in a variety of roles and coordinating the Spanish Special Interest Group for a number of years. She was also a member of the American Translators Association (ATA).

The poor health that had dogged Marta since the late 1980s never dimmed her radiant smile or diminished her love of life. Until very recently, she was a regular at AATIA meetings. Gifted in many ways, she had an ability to see a diamond of a translator in a newbie chunk of coal. Marta Cecilia encouraged and mentored many and will be fondly remembered by all.