Review of May 13th meeting: Professionalism and Asian languages

As announced, our May 13th meeting featured a panel of Asian-language specialists and a presentation by AATIA member Marco Hanson on “How to Come Across as a Professional.” Here is a review of the meeting, with thanks to Marco and to AATIA President Tony Beckwith and AATIA Director of Professional Development Monika Spindel, who contributed summaries and photos. 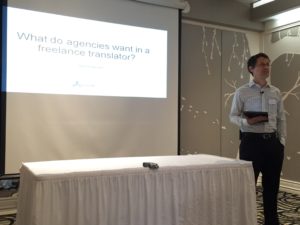 The meeting kicked off with Marco’s presentation, which  addressed two key questions for translators and interpreters working in any language: “What do agencies want in a translator?” and “How to write a freelancer resume that will get response from U.S. agencies?”

A translator/interpreter who runs his own agency, Marco is ideally positioned to offer advice to beginners and seasoned professionals alike. He discussed the traits that agencies look for in a translator, strategies for standing out from the crowd, and the importance of first contacts with potential employers, which he characterized as an “audition” that hopefully leads to repeat engagements. He explained that of course agencies look for people who know how to translate well; but just as importantly, they appreciate those who understand their own limitations and don’t offer more than they can deliver.

Marco reminded attendees that “This document may be called your resume, but it’s actually the first job you’re submitting as a sample of the very best work you can do as a language professional,” so make sure your resume is proofed, spell-checked, and perfect. 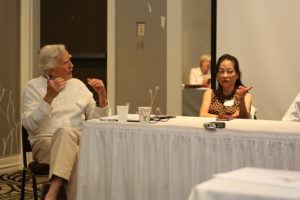 During the second half of the meeting, AATIA President Tony Beckwith moderated the panel of Asian-American linguists, which began with a presentation by Vince Cobalis, a member of the City of Austin’s Asian-American Quality of Life Commission, on demographics of Asian populations in Austin and and language access issues affecting those populations. There are about 60,000 Asian-Americans in Travis County. Austin has the ninth largest Asian community in the country, among the thirty largest cities. The top Asian-language communities in Austin are Chinese, Vietnamese, and Korean. 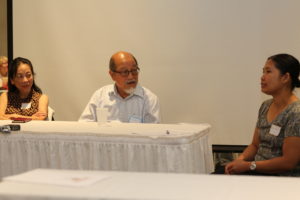 Panelist Mimi Tran came to the US at age 19 in 1975 and was educated in the US. She has been interpreting for courts in the Austin area for thirty years, and is the only Vietnamese court interpreter licensed by the Texas Judicial Branch Certification Commission in the Austin area. She noted that there are now enough Vietnamese speakers in the Austin area that people can get by without learning English. Second-generation Vietnamese-Americans, however, tend to speak only basic Vietnamese and are fluent in English. Describing some of the challenges of interpreting from Vietnamese, Mimi explained that Vietnamese speakers consider it disrespectful to look someone in the eye during a conversation and that it’s hard to get a simple “yes” or “no” answer out of Vietnamese witnesses because they want to explain, which can be frustrating to lawyers.

Panelist Pawkhu was born in Burma and grew up in a refugee camp in Thailand, but her ethnicity is Karen. She is the Burmese Healthcare Navigator at the Austin Asian-American Cultural Center. Pawkhu explained that Burmese people have only one name, and when they move to the US the name is sometimes broken in half to form a new first and last name. There are 135 ethnic groups in Burma, who speak multiple languages, and many Burmese refugees don’t speak, read or write Burmese.

Comments and questions from the audience brought in perspectives from China, India, and Spanish-speaking countries.

The AATIA Board hopes to continue broadening the Association’s support for Asian and other language professionals.