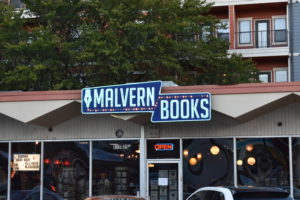 In what is steadily becoming an annual tradition, AATIA celebrated International Translation Day at Malvern Books on September 30, 2018. It was standing-room-only (SRO) at the charming bookstore, with extra chairs brought in to accommodate the overflow and late arrivals standing in the back. 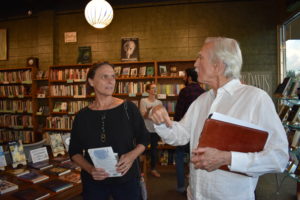 Kristin Siracusa Fisher, the coordinator of AATIA’s Literary Special Interest Group (LitSIG), and her crew of volunteers supplied an excellent selection of sweet and savory snacks, coffee, and sparkling waters. Tony Beckwith, AATIA president, officiated as MC and got the evening started with a nod to St. Jerome, the patron saint of translators, whose Feast Day (September 30) is the official date for International Translation Day.

Tony then introduced Marian Schwartz, who translates from Russian, who read from her latest book, Leonid Yuzefovich’s Horsemen of the Sands, which will be published on October 30th. Tony noted that Marian has been the driving force behind LitSIG for many years and described her as “not only a celebrated translator; she is also the best friend a literary translator could have.” 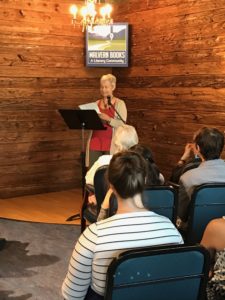 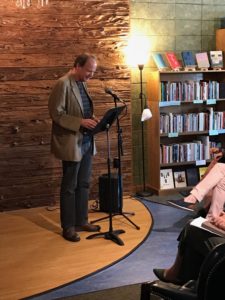 Next up was Philip Boehm, a translator, playwright, and theatre director, who is the author of more than thirty translations of prose works and plays by German and Polish writers. He read from his translation of Hanna Krall’s Chasing theKing of Hearts, which has just won the 2018 PEN America Literary Award for Translation.

Tony then explained that after Harvie Jordan, one of the founders of AATIA, passed away in 2002, a fund was established in his name. This year it was decided that some of those funds would be used to endow a Lifetime Service Award to be given annually to a member of AATIA who meets certain criteria. 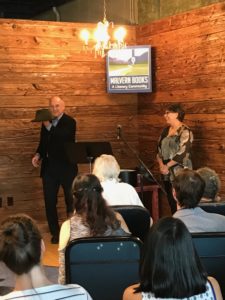 Since this is the first time the award is being presented, the Board decided it should go to Esther Diaz, who has been a constant rock of support and inspiration to the association she helped to found over 30 years ago. Harvie had an abiding fondness for hats and so, in his memory, rather than presenting a plaque or a gift card from Amazon, it was decided that the award would be a fedora. Michael Blumenthal presented Esther with the stylish hat, which she promptly put on and wore for the rest of the evening.

After the presentation, a large crowd stayed on to get their new books signed by Marian and Philip, finish off the snacks, and enjoy the company of their peers on this special occasion.

Our next event will be our November general meeting, on Saturday, November 10th, from 1 to 4 p.m.  Since this will be our last general meeting of 2018, we’re planning a festive meeting with special refreshments. Program details will be announced soon, but meanwhile please save the date!
And in case you missed our last general meeting, you can check out this video to find out about tax tips for freelancers from CPAs Iain Howe and David Romero. Click here for their slide presentation.
2018 PEN America Literary Award for TranslationEsther DiazInternational Translation DayMarian SchwartzPhilip Boehm