On a rainy Saturday afternoon about thirty translators and interpreters gathered for the AATIA’s March General Meeting. Those who were there will recall that the room buzzed with excitement as members greeted each other and chatted over a cup of coffee. 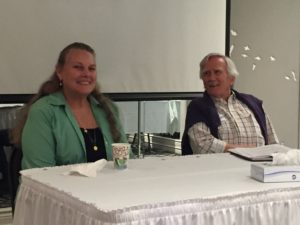 The afternoon got off to a great start when Cristina Helmerichs was introduced as the first speaker. Cristina has more than 30 years’ experience as an interpreter and translator. She is a double AA (English-Spanish) conference and judicial interpreter, a federally certified court interpreter, and was recently elected as an at-large member of the ATA’s Board of Directors. She was one of the first members of AATIA, and was present at the association’s historic charter meeting at La Tapatía restaurant in Austin on December 6, 1985.

Cristina recalled coming from her native Venezuela to school in Austin, where she discovered her passion for interpreting. She spoke to the meeting—in her trademark tell-it-like-it-is fashion—about her experiences in the judicial system, and encouraged newcomers to take the classes offered at ACC and spend time at the courthouse observing professional interpreters at work. She also talked about conference interpreting, and suggested that aspiring interpreters could practice their skills by interpreting television programs such as Ted Talks.

After a break for socializing (and delicious pastries and a selection of fruit), the second part of the program got under way with an absorbing presentation from Michele Aynesworth, a literary translator who was also a folk singer in her younger days. Michele has a doctorate in comparative literature and translates from French and Spanish. She spent over twenty years in Argentina, where she fell in love with Argentine folk music, especially the zamba. During the program she discussed the considerable challenges involved in translating song lyrics into “singable” English, showing her step-by-step process in a PowerPoint presentation on the screen. She then delighted the audience by singing two of her translations, in a lovely voice reminiscent of Joan Baez, accompanying herself on her guitar.

It was all over too soon! Many thanks to Cristina and Michele for providing such an informative and inspiring view of these two very different aspects of the work that translators and interpreters do every day. See you in May!