2017 meeting year ends with a flourish

Our last meeting of 2017 was attended by some 40 AATIA members and friends, who were treated to two very different but equally interesting presentations. 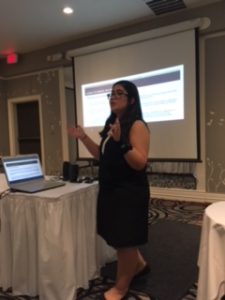 Adela Navarette got us started with some tips on how we translators and interpreters can use social media to promote ourselves, find clients and create an image for ourselves and our businesses. She walked us through the basics of setting up an account on LinkedIn, Facebook, and Twitter and outlined the target demographic and the pros and cons of each. Her #1 tip:  post  regular updates on all your social media accounts. Otherwise, she says, people will forget about you. Download her PowerPoint for more tips.

Adela is a senior at the University of Texas at Austin with a major in international relations and global studies and a minor in Middle Eastern studies. Having grown up in the age of social media, she has witnessed its evolution from casual apps to platforms for strategic marketing. 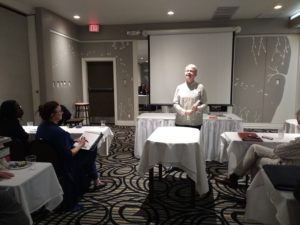 In the second part of our program, award-winning Russian translator Marian Schwartz told us about three of her latest translation projects. One is a crime novel entitled Madness Treads Lightly, by Polina Dashkova, who is, Marian says, “the queen of crime” in Russia, but is little known in the US because, until now, none of her books had been translated into English. The book is based partly on real events involving a serial killer in the late Soviet period. Marian loves the book because “it’s got a great heroine,” who manages to link a couple of present-day murders to the serial murders of the past. Also, “it’s got two of the creepiest psychopathic killers you’ve ever encountered in crime fiction.” 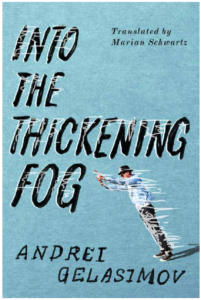 Into the Thickening Fog is by Andrei Gelasimov, one of Marian’s favorite authors. This is the fifth of his books that she has translated. The book’s title in Russian, Холод, means “cold,” which is apt because it takes place in the Siberian city of Yakutsk, where winter temperatures regularly drop to -40 degrees. The cold, according to Marian, almost becomes a character in the story, which is about a native of the city who returns unprepared for the frigid temperatures. Marian’s editor came up with the English title, with input from her. It was not translated literally partly because, while it’s clear that the Russian word is a noun, “cold” is both a noun and an adjective in English. In addition, apparently there are already 20 or so English-language books called “Cold.”

“One of the best things about being a literary translator,” Marian says, “is that you never

know who is going to call you.” One day when she picked up the phone the caller was Stepan Solzhenitsyn, son of Aleksandr Solzhenitsyn, which is how she came to translate the third volume in Red Wheel, Solzhenitsyn’s cycle of historical novels covering World War I, the two Russian revolutions of 1917, and their aftermath in 1918. One of the major translation challenges, in addition to the book’s sheer length (some 700 pages covering just five days during the February 1917 revolution), was that Solzhenitsyn made up words, and trying to narrow down their meaning was difficult because when Marian Googled them, the only references she found were related to Solzhenitsyn’s works.

Marian is also translating the next book in the cycle, which is also around 700 pages long but covers only three days. “If you can just calm down and not worry about having 700 pages ahead of you and just enjoy the work, it’s an amazing story,” she says.