Elections for the 2020 Board of Directors 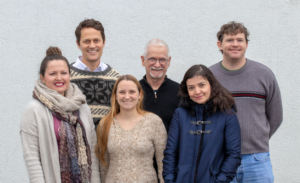 Marco is a licensed court interpreter and ATA certified translator. He earned a master’s degree in Spanish Linguistics at UT-RGV and spent four years at the Texas Office of Court Administration as statewide Language Access Coordinator. A past president of AATIA and the Texas Association of Judiciary Interpreters and Translators, he now teaches legal translation at ACC and court interpreting at UT. He and his wife Margaret own Texan Translation, a language services provider in Austin which offers dozens of languages.

I have been a freelance French/Spanish to English translator for 10 years and a member of AATIA since 2015. I am running for the position of Secretary because I strongly believe that involvement in local associations is important. They create connections that propel everyone forward and can last a lifetime.

I have been serving as the current Secretary since last January, and served the previous year as the Shadow Secretary. I look forward to continuing the work I am doing as Secretary of the Association and respectfully ask for and would really appreciate your vote.

Michael Meigs is publisher and editor of www.CTXLiveTheatre.com, devoted to live narrative theatre throughout Central Texas. He has translated book-length works from Swedish, Spanish and German, including four for Amazon Crossing, a subsidiary of Amazon.com. He also works in French, including seven weeks 2018-2019 of classwork and field work with officers of the Haitian National Police. He does contract translation work for Texan Translations, Austin. Michael is secretary and bursar of Gilbert & Sullivan Austin and is a member of AATIA, the AATIA Literary Special Interest Group, the American Theatre Critics Association, and the American Literary Translators Association. He served for more than thirty years as a Foreign Service Officer with the United States Department of State.

I started working as a volunteer translator in 2012, translating microloan applications and news reports from Latin America, Spain, and Germany.  In 2014 I started working as an in-house translator and phone interpreter. I joined the AATIA that same year after learning about the organization from Esther Diaz’s class Introduction to Community Interpreting. It is in no small part because of the connections, support, and kindness of the other AATIA members that I have been able to make the strides I have made in my career as I transition from an in-house to freelance translator.

As the Director of Membership, my desire is to promote the AATIA so that new members and potential members can also get the same quality of support and help that I have received. This will be my first time serving on the AATIA board. I look forward to helping the board and representing the AATIA in 2020.

I was born and raised in México. I graduated with a B.S. in Industrial Engineering from Tecnológico de Monterrey in 1990. I became a Bilingual Texas certified teacher in 1997. I started my career as a translator in 2007 as a Spanish Language Analyst with the Federal Government. Since my background was not in language, I decided to go back to school and in 2015 I earned an M.A. in Translation and Interpreting into Spanish from UT at Brownsville where I was also the recipient of a Scholastic Excellence award. As a result of my graduate studies, I have traveled overseas, taught a workshop titled “Sight Translation, a Prelude to Simultaneous Interpreting” at a national symposium, and co-taught and co-developed the curriculum for a translation class for incoming language professionals at my workplace. Also, in 2019, I spearheaded a working group that developed and proposed a Mentoring Program at the national level. The proposal was approved and Executive Management at my workplace is currently working on the Mentoring Program developing phase.

I’m running for Director of Professional Development because I strongly believe education is a legacy.

I joined AATIA during my first year in Austin, and I have loved everything about it and am thankful for all that it offers.

As shadows, the current board trained for this year and I would like to stay on my position to keep implementing what we believe is helping our organization. I am still learning and new ideas come with time and experience.I studied Modern Languages in Colombia and my university’s approach was Translation and Organizational Communication. I have been working as a translator since 2014 and I hope to stay in this beautiful profession.