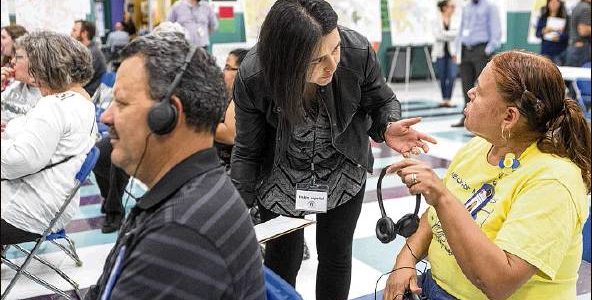 AATIA members in the news 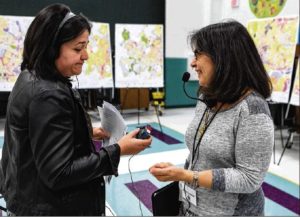 Interpreters Carolina Martin (left) and Susana Pimiento test headsets and receivers to be used by those needing real-time interpretation of Spanish, Vietnamese, Arabic and Chinese during the CodeNext open house at Hart Elementary School on Wednesday. STEPHEN SPILLMAN / FOR THE AMERICAN-STATESMAN

AATIA members Carolina Martin and Susana Pimiento were featured in a first-page article in yesterday’s Austin American-Statesman about the city of Austin’s CodeNext initiative. The aim of CodeNext is to revise the city’s Land Development Code, which determines how land can be used throughout the city – including what can be built, where it can be built, and how much can (and cannot) be built.

Concerns have been expressed about lack of outreach to people with limited English proficiency who may be directly affected by the initiative and in general about the city’s response to residents who are not native English-speakers. As reported by Esther Diaz at our August 2016 general meeting, a language access audit conducted in 2016 revealed that, while the city of Austin has made efforts to provide language assistance services to Austin residents, it may not be meeting the needs of all residents.