News from the literary translation world 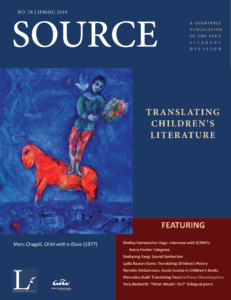 The most recent issue of Source, the quarterly online journal of the Literary Division of the American Translators Association (ATA), focuses on translation of children’s literature and features a charming poem by AATIA member Tony Beckwith.  “What Would I Do?”, Tony’s poem, perfectly sums up why a lot of us can’t imagine ever getting out of the T&I biz.

In other literary translation news, AATIA member Liliana Valenzuela was invited to present a paper at the 8th International Congress of the Real Academia de la Lengua Española (Royal Academy of the Spanish Language), held in Cordoba, Argentina, March 26-30, 2019. The event brought together more than 200 writers, scholars, academics, and translators to discuss various aspects of the Spanish language, which is spoken in 20 countries by 500 million people. Distinguished guests included the King and Queen of Spain, the President of Argentina, and writers Nélida Piñon, Mario Vargas Llosa, and Joaquín Sabina. Needless to say, it’s quite an honor to be invited to speak at one of these congresses, which are held every three years in a different Spanish-speaking country.  Kudos, Liliana!

Liliana was part of a panel of distinguished translators, including panel moderator Miguel Sáenz, a member of the Royal Academy and the Spanish translator of works by Günter Grass, William Faulkner, Thomas Bernhard, and Franz Kafka, among others. Liliana is the award-winning translator of novels by Sandra Cisneros and other Latina/o writers who write in English, and her presentation was titled “Espejo invertido: Recreando la estética híbrida de autores hispanos de Estados Unidos en la traducción.” It starts at 56:41 in the video below.
Liliana ValenzuelaMichele AynesworthTony BeckwithVIII Congreso Internacional de la Lengua Española