Some 30 members and friends turned out for our general meeting/celebration of Bastille Day on July 14th and were not disappointed. Standing in for President Tony Beckwith (who was out of town for his regular gig interpreting for Latin American firefighters), “Shadow President” Marco Hanson opened the meeting by asking everyone to introduce themselves. We were delighted to welcome several members who had never attended one of our general meetings, as well as a number of students from Esther Diaz’s translation and interpretation classes at Austin Community College. 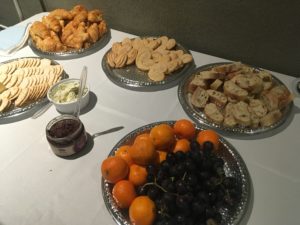 “Shadow Secretary” Sarah Baiz did an outstanding job of selecting an array of delectable French-inspired refreshments, which began disappearing as soon as she put them on the table. Merci, Sarah!

Our presenters, Patricia Thickstun de Ribes and Michael Meigs, interviewed each other about their respective backgrounds and experiences as translators/interpreters of French (among other languages), and the result was a thoughtful and entertaining program featuring personal anecdotes and musings about our shared profession. 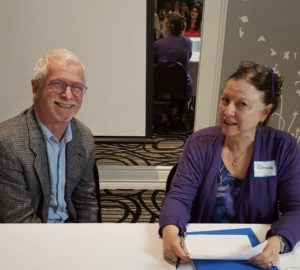 Michael’s journey into translation and interpreting began when he signed up for a Spanish class at the age of 16. “It grabbed me,” he said. He went on to major in Spanish in college, where he also started picking up other languages. After receiving his undergraduate degree, he joined the Peace Corps and was sent to Côte d’Ivoire, where the official language is French, a “terrifically eloquent and varied language.” The diversity of expression in French, he pointed out, is almost as rich as in Spanish.

Following his stint in the Peace Corps, he enrolled in an MBA program in New York, spending his second year at École des Hautes Études Commerciales in Paris, after which he applied to join the US Foreign Service. There followed a 30-year career as a diplomat, much of it spent in French- and Spanish-speaking countries. His foreign service career included three years as head of the economics section in the US Permanent Mission to the United Nations in Geneva.

After his retirement, he moved to Austin and got into T&I. Nowadays, he splits his time between literary translation and interpreting for refugees and asylum-seekers. He has also become involved in Austin’s theatre scene through his website CTX Live Theatre.

Patricia described her first foray into translation as a “false start.” It came about when she read Franz Kafka’s The Metamorphosis while in college. The translation was, she thought, “atrocious.” So, equipped with two years of high-school German, she set out to produce a better one. Her German literature professor was encouraging, but ultimately she realized that her translation really wasn’t very good, so she set it aside. She went on to study microbiology and immunology, eventually earning a doctorate in the latter field from Université de Paris-VI. But she quickly found herself drawn back into translation when she was asked to translate scientific articles written by colleagues in French, a sideline that led to her first paid translation job and launched her career as a translator.

Her favorite translation project, for which she was selected through a process she characterized as a “beauty contest,” was the translation of a physics textbook. She didn’t realize at the time that her fellow competitors for the project were all Ph.D physicists. She believes that she was selected because, although physics was not her primary field of expertise, she was able, and unafraid, to ask intelligent questions, thanks in part to having attended a terminology workshop presented by staff of the Office québécois de la langue française at an annual conference of the American Translators Association (ATA). Her translation of the textbook, Atom-Photon Interactions: Basic Processes and Applications (C. Cohen-Tannoudji et al. John Wiley & Sons, 1992), continues to be used in university physics courses.

“That’s the sort of experience that warms the heart of a translator,” commented Michael. “But I won’t say that kind of success makes it all worth it,” he added, “because the work  of moving meaning from one language to another is satisfying in itself.”

Patricia left us with this bit of advice, borrowed from Neil Inglis, a translator and now senior reviser at the International Monetary Fund: Strive at all times for excellence and subject-matter proficiency. Above all, steer clear of the trolls and naysayers who are common in the translation blogosphere. They preach a shabby gentility, more shabby than genteel. Seek out success stories rather than failures. Let quality be your watchword, and everything else will follow.