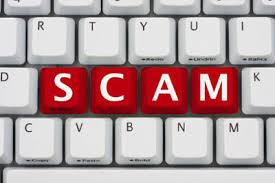 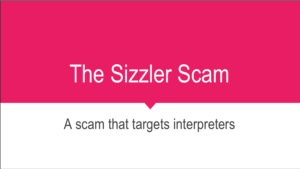 Attendees at our last general meeting of the year, held on Saturday, November 10th, were treated to a wide array of delicious refreshments and a useful presentation and discussion on avoiding scams. Our outgoing Director of Professional Development, Monika Spindel, related her experience with a scam that was a little unusual because it targeted interpreters (whereas most e-mail scams seem to target translators). Partly because of that and partly because she’d been on the lookout for new and challenging work opportunities, Monika initially fell for the scam, but after exchanging a few e-mails with the “client,” she began to get suspicious. Monika’s e-mail exchange with “Cameron Sizzler,” the supposed client, is documented in her slide presentation, available here.

First the “client” offered to pay her 30% in advance. Then it was 40%, and then it was 50%. She was then instructed to send part of the check she received by mail to the “Event Planner to cover for Rental, Reservation/Booking & Services rendered.” At that point she knew for certain that she’d been the target of a scam, but if she’d had any lingering doubts they would have been erased when she found out that the other interpreter supposedly hired for the job was based in Washington, DC, and had been hired to work at a conference in Washington, not Austin!

Needless to say, Monika was not surprised when her bank confirmed that the check she received  – which was for more than $1,000 over her quoted fee – was worthless.

Although this scam attempt had some unusual features (such as asking the interpreter to pay the event planner…), it also had all the usual hallmarks of a scam: the e-mails were poorly written and came from a gmail address, despite the fact that “Cameron Sizzler” claimed that he worked for Venn Recruiting, a UK-based company that does exist, but it does not hire interpreters for conferences. And the scammer offered to pay in advance, something that legitimate clients hardly ever do.

Other members related stories of similar scam attempts they had dealt with, and we got so caught up in the discussion that we ended up not having time for the word games we’d planned to play, so that has been postponed until our next general meeting, on January 12, 2019.

AATIA’s Literary Special Interest Group (LitSIG) held its last meeting of the year on November 17th. Attendees enjoyed an excellent and informative presentation by Michael Meigs on the subject of self-publishing. He discussed his own experience with his translations of Cold Homeland, by German author Andreas Kossert (translated in 2017) and The Dean, by Swedish author Lars Gustafsson (translated in 2011). The discussion touched on the nuts and bolts of self-publishing, including getting permission to translate and self-publish; obtaining an ISBN number; and some of the platforms available for digital self-publishing.

LitSIG’s next meeting will take place on January 19. Details will be posted in the “Upcoming Events” section of our website.

Capping off the year, the outgoing Board of Directors met with the newly elected Board on December 1st. Among other decisions, the Board voted unanimously to award honorary lifetime membership to Rose Tempfer for her many years of devoted service to AATIA. Rose has been on the Board for the past eight years and has held various offices, including the presidency. She has also served as an administrator of AATIA’s Facebook page since 2011 and was the Coordinator of the Interpreting Special Interest Group (ISIG) from 2009 to 2011. Congratulations and many thanks, Rose!